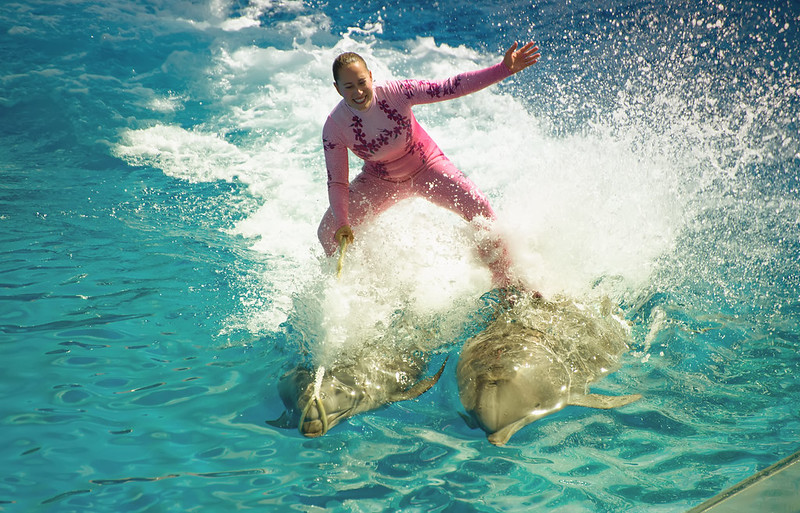 Couple of weeks ago I visited San Diego for a brief vacation. On one day I went to the San Diego Zoo, which had rather impressive reviews everywhere but was a bit disappointed as it was nowhere near good as  they claimed to be.

The next day, we headed for the SeaWorld San Diego, and this time I had my reservations. But unlike the zoo this was totally worth it; they had all sorts of performances with seals, killer whales and dolphins and was simply amazing. This was the show with the dolphins, and I was able to catch this moment which thought was pretty cool!

Last Thursday afternoon, I crossed off another item off my bucket list; I always wanted to go see Sumo, but for one reason or another I somehow never got around to do it. Now with only few days left here, I was running the risk of never doing it, but then my good friend Aurora intervened and took me to the Sumo, and it was pretty awesome! 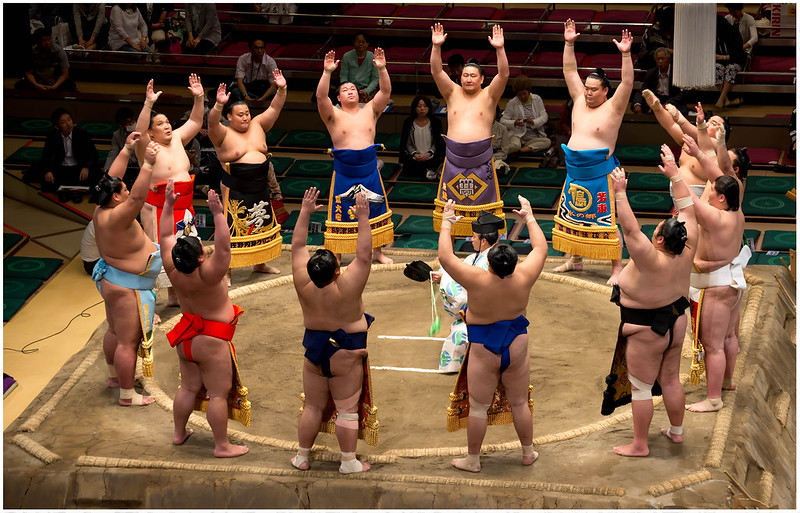 Some sort of opening ceremony-ish thing. 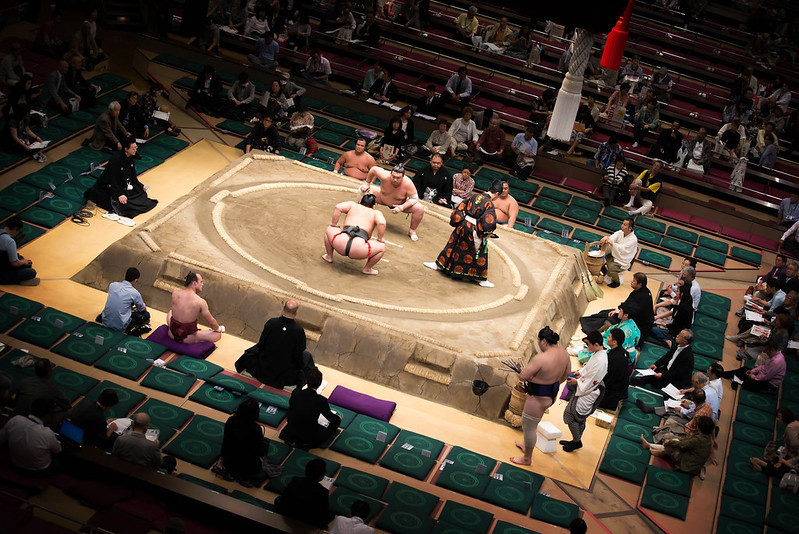 Love how the composition of this one turned out to be. 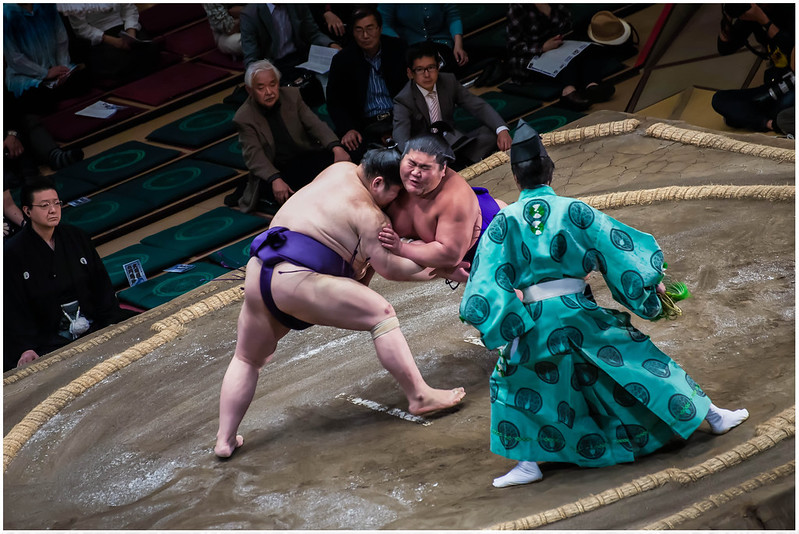 Game is on! Or whatever the equivalent wording of Sumo. 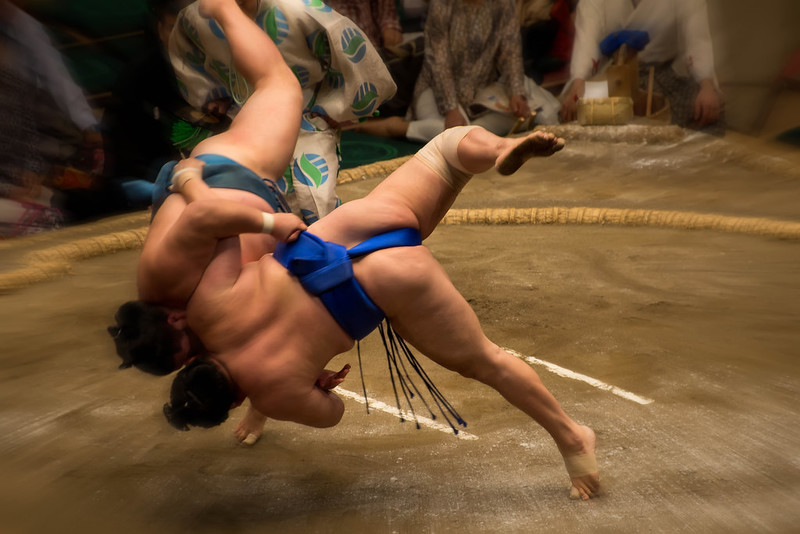 I was so lucky to get this shot, in this exact moment. The motion blur post processing helped, I think. 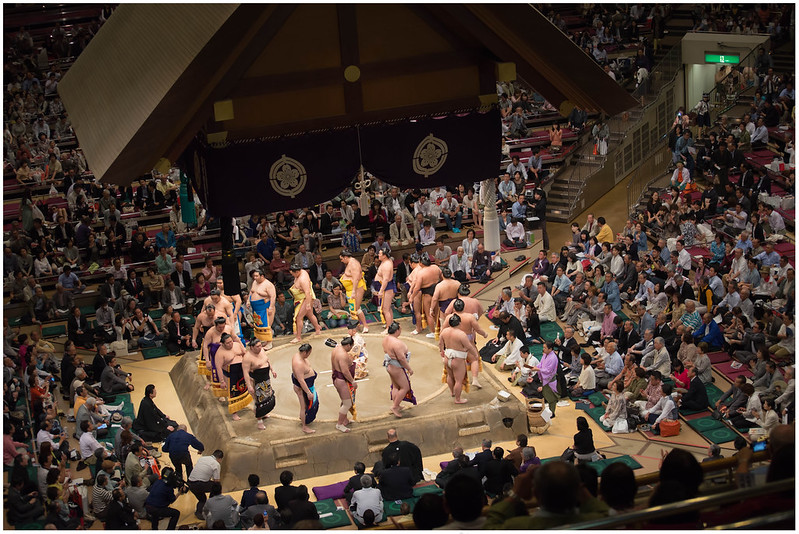 Another one of ceremonies. 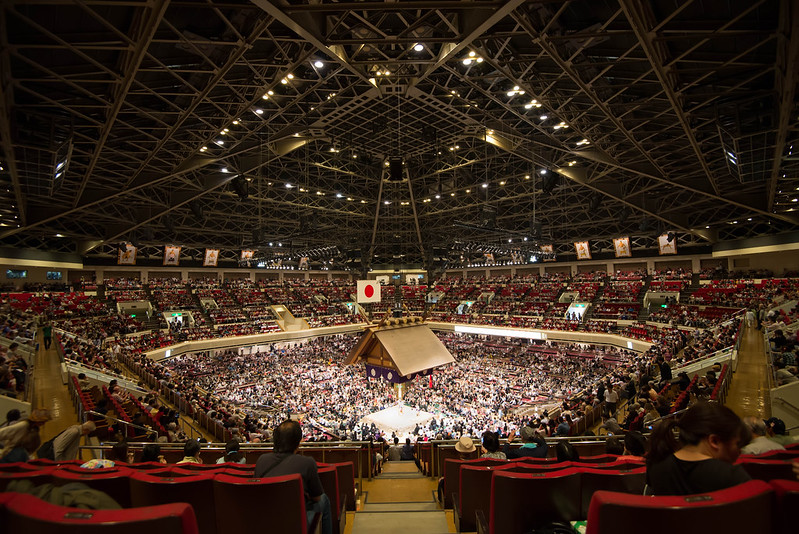 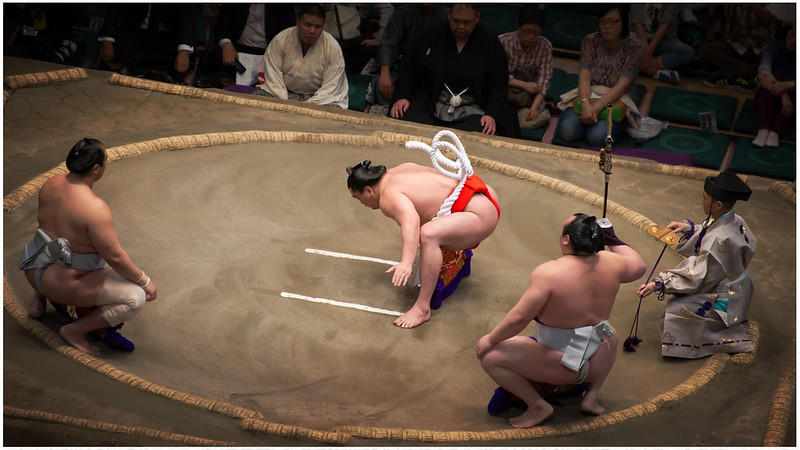 Another ritual. Damn I really needed to have had a guide. 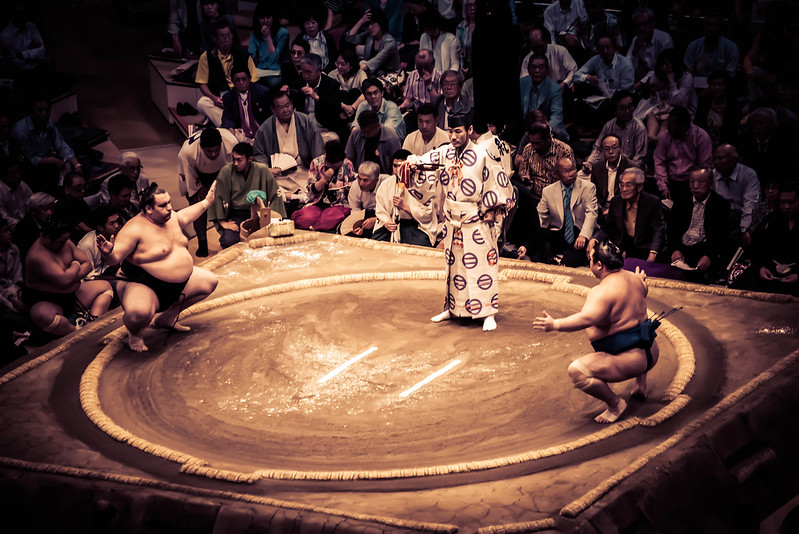 I love the way post processing turned out on this one. 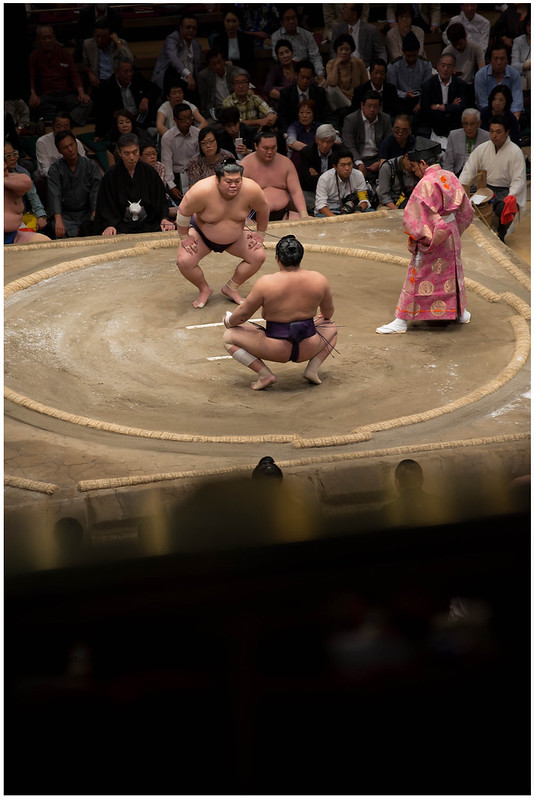 Another interesting sort of angle, I think. 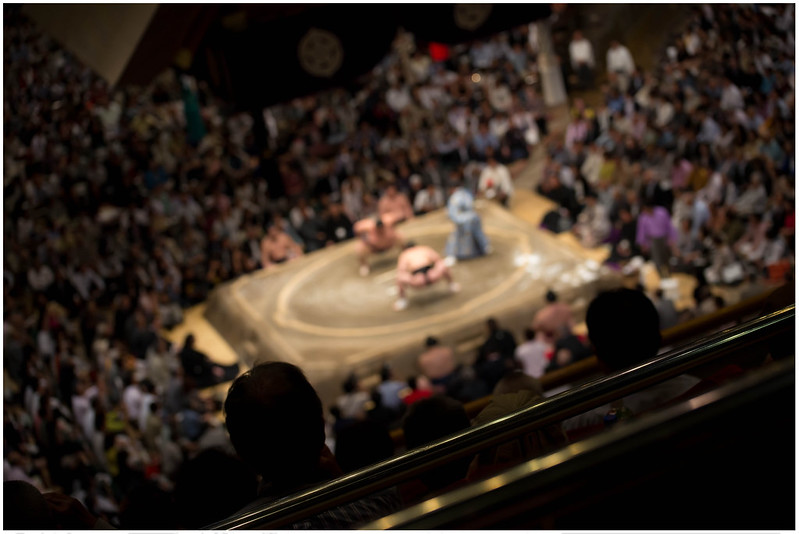 Me trying to be artistic. 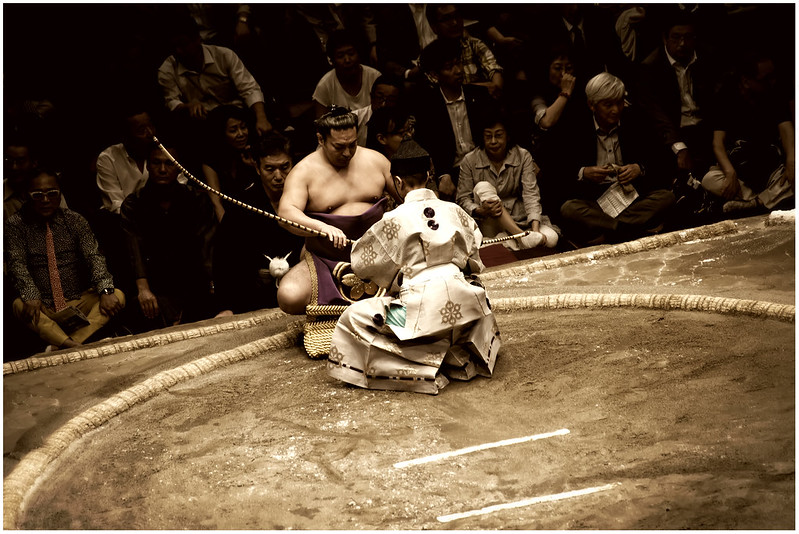 The day’s winner. I think. 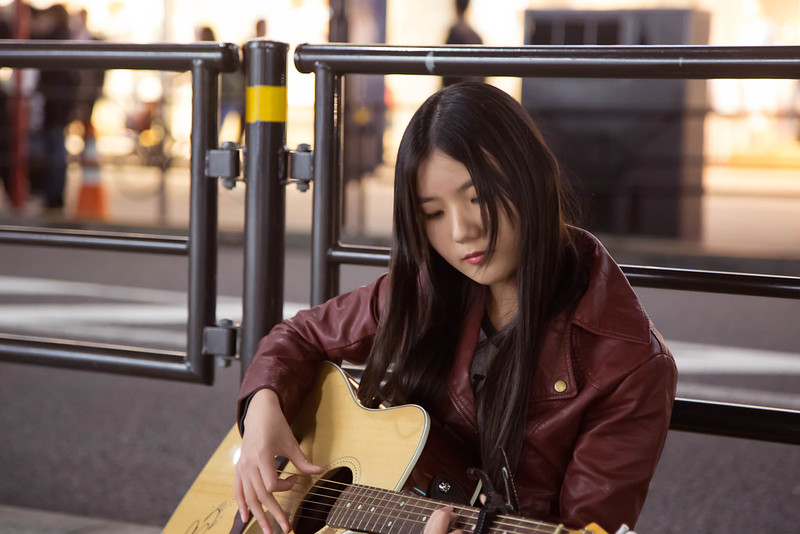 Yesterday was fun. Like, TOTALLY! It was one of the best photowalks I’ve ever been to here in Japan, and with good reason. To begin with, I prepared a tad too much and so messed it up completely, just like me; in the morning I plugged in the battery to charge it despite it having more than half the life remaining, and so in the evening I headed back home for a quick shower, change of clothes and a snack, then grabbed the camera and headed out. All good, only minor glitch in the whole plan is that I promptly forgot the battery and left it home. And didn’t realize it till I arrived at the Harajuku station which is where the meetup people were supposed to… meet.

But luckily my friend Aurora was there, to whom I promised I’d be her wingman for the day, but now without a camera I was only going to be able to just do that anyway, but she was cool to let me borrow her camera whenever we cornered an unsuspecting victim; because the theme of the photowalk for the day was portraits of strangers, as in we were supposed to talk to random strangers and get them to pose for us. It was a fun experience with us having varying degrees of success from some people just turning away coldly to some others being completely confused and let us take the photos anyway to few more actually finding it rather cool and wanting to take pictures with us with their mobile phone cameras too! Finally when we gathered together again, in front of the station, this lovely girl was chilling with the guitar without a care in the world. I approached her and asked her permission with a thumbs up and she was totally cool for it. I think the photo itself turned out rather okay, though I could have done better composition wise at least.

After the photowalk it was time for food and beer, and as always, that too was fun.

Japan is a truly amazing place. There’s a little bit of everything there; ancient heritage sits side-by-side with the high tech lives, there’s culture, there’s fashion, there excellent food, people are super nice and so damn reserved at the same time, and lots more. And even though these western festivities are recent imports they celebrate them all from the heart. There are Christmas parties and Octoberfests starting from May, they celebrate the Valentine’s Day (where girls are supposed to treat guys – imagine that!) and sort of a return Valentine’s Day on March 14th where you’re expected to out-do the girls (cunning, aren’t they) and of course, Halloween! And Halloween in particular is a time for all of them to let their hair down a bit and have fun.

Roppongi area is particularly famous for night life here, and during Halloween it really, and I mean really, comes to life. There are lots of bars and pubs around and people gather in numbers with all sorts of costumes and you can’t literally walk the streets without bumping into few people every few feet. And for a change, if you’re with a camera, they want you to take their pictures. I headed there with a bunch of friends yesterday – most of them photographers – and we had a really great time. Here’s some highlights from the nights.

A Fox and a Cat

These are two more photos from the last week’s “Drink & Click” event in the neighborhood of Harajuku Station, Tokyo.

The first one was a pleasant surprise. As mentioned in the previous post, Google had brought some models and we (well, the others) were photographing them while walking along the streets with them. Practically, they were taking us wherever they pleased, and at one point there was a rather dark alleyway to which they ventured into. I was thinking to myself “there’s nothing here!” when we turned a corner and the lovely building in the first picture greeted us!

The second picture has an even better story behind it. Like I mentioned before Trey Ratcliff was attending the party, and when I was getting ready to shoot the second picture I noticed he had only just finished taking more or less the same one. I made a mental note to keep and eye for that photo, whether it’ll turn up in his portfolio, and he didn’t disappoint. A couple of days later he had it up in his Google+ stream which was pretty damn well processed. So I attempted to emulate what he had done, and predictably fell short of the mark, but still I like the way it turned out.

If you’re interested, his photo can be found here.

Last week a photowalk named “Drink & Click” was going to be held in Tokyo, during which time Trey Ratcliff was also going to be in Town. The organizer of the photowalk happened to be friends with Trey, so he invited Trey and somehow Google joined in as well. Perhaps because the Google+ head Vic Gundotra was in town and they work closely with Trey. Either way it turned out to be sort of a proper Google+ event.

Google had brought some Japanese models with them so we could walk along the streets and take pictures as much as we liked. Unfortunately I’m in a transition from Canon DX to Nikon FX, so, I only have a Nikon 16-35mm wide-angle lens with me which is more or less useless for that sort of photography.

So I ended up photographing landscapes and ironically, plastic models.

Colors of Life
Blog at WordPress.com.